Dragon boating adventures: Paddling from the front bench & being a "featherbutt!" 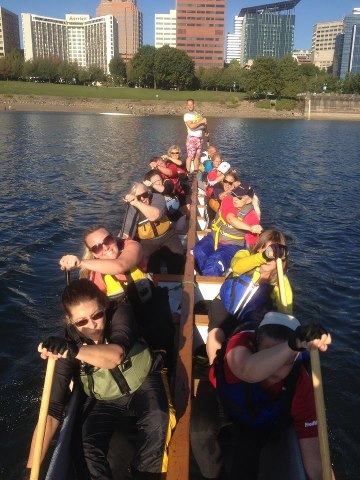 Yesterday my coach gave me the opportunity to paddle from the front bench. How honored I felt to experience paddling the dragon boat from the front of the boat rather than the back, where I sit during races. That's me with the dark hair, glasses and black shirt, sitting in the front bench, starboard side.

Being placed in the front of the boat, even temporarily on a trail basis, must mean that my coach thinks I'm ready to move my paddling skills to the next level, to learn a new, more finessed way to paddle. A new stroke. That mirrors what I've experienced in my life off the river too.

This past week marked one year since my life took an unexpected turn when I was laid off from a job I thought I loved. At first, I felt as if the wind had been knocked out of me and I couldn't catch my breath. I wondered how I'd survive.

Through the grace and generosity of others--and my own gritty determination deep down in my genes--I've not only survived, but thrived.

One dragon boating friend paid me a high compliment. "The saying 'What doesn't kill you makes you stronger' isn't true for most people," he said. "But for you, it is."

A year after being delivered what I thought was a fatal blow, I'm a healthier and happier woman. I've lost 45 pounds (so far!) and have gained confidence. I ditched truckloads of material things that were cluttering my life and am living a streamlined, simpler life.

I didn't just start a new chapter. It's a whole new book.

Even at work, I'm flexing new muscles and pushing myself further. For the past seven months, I've worked as a news coordinator in the newsroom at my city's daily newspaper. Through the coaching of my editors and fellow reporters, I've become a better writer.

Recently I was promoted to education reporter. Yesterday I had a my second front-page story, and today I had an interesting feature story on the front of the Sunday "Life" section. To celebrate my year anniversary of being laid off and beginning a new life in the newsroom, I made my Mexican brownies for the newsroom staff.

I'm flexing new muscles daily, both in the newsroom and on the water.Yesterday at dragon boat practice coach Jeanie worked with me to teach me this stronger, more complex stroke to allow me to pull more water so our boat can power through the water.

This stroke feels different. It's another new thing to learn, but I'm determined to learn it. I perched on the front bench, breathing out with each stroke. Reaching further. Digging deeper. And pulling water with my teammates as we skimmed across the Willamette River on a glorious October morning.

The experience was even sweeter when Debbie shouted encouragingly: "Go, featherbutts!" I'm a featherbutt!