Paring down to the essentials

Opening a plastic bin, I found a little bear souvenir I'd bought on my family's trip to Yellowstone National Park when I was 10. One of the bear's front legs had broken off at the knee (do bears have knees?) and the paint was worn. Why had I kept this memento for decades? I took the bear's photo with my phone and then tossed him in the garbage. Goodbye, Mr. Bruin!

One decision made--and only 99 more and this one bin would be empty. Looking around me at the dozens of bins around me in my storage unit, I shook my head. I was overwhelmed with too much stuff.

How would I ever go through all this "stuff and junk" as my Swedish grandma, Lydia called it? More importantly, how--or why--did I ever accumulate so much stuff?

For almost four years, I've been in a drastically downsizing mode. It started as involuntary simplicity set into motion with my divorce, being laid off at work and then having to sell and empty a large house extremely quickly--a week before Christmas.

I moved five times in less than two years, out of necessity to live within my frugal budget of my new normal. I started with a 2,400 square foot house and continued downsizing, eventually shrinking my footprint to the 540 square feet of Wisteria Cottage, a cute artist's studio with no bathroom, kitchen or heat. It was really cheap and fit my budget. But most of all, it kicked my simplicity into high gear.

The only essentials I purchased for Wisteria Cottage were a mini-fridge and a Luggable Loo--a five-gallon bucket with a toilet seat and lid--for emergencies. Thankfully, I never had to use Loo, but it was comforting knowing she was there, just in case.

In Wisteria Cottage, I would not need a dining table. I'd already given away my best dining table to my friend, Henry two moves before that. I had been using an old garage sale table that once sat in our basement family room of our old house. With the moving truck arriving soon, I didn't have time to Craigslist it. I carried the table to the curb and taped a "FREE" sign to it. Minutes later, it was gone.
﻿
﻿
A cumbersome steamer trunk had been a fun antique in my enormous, 90-year-old house, but it would not fit in 540 square feet. I was paring down to the essentials, and the trunk wasn't even useful. It was locked and the key had been lost years ago. It was time for us to part ways. Two young women had moved into the duplex next door recently. I knocked on their door and asked if they'd like an antique steamer trunk. They helped me lug it up my basement stairs and into their living room. Grinning, they sat on the trunk while I took their photo.
﻿﻿﻿﻿﻿﻿


﻿
Some stuff--such as an enormous basket of dried lavender from my old garden--I couldn't donate to charity. But I didn't want to throw it away. A woman interested in renting the apartment I was moving out of knocked on the door, so I gave her a tour. She left toting the basket of lavender. Goodbye lavender!

﻿﻿﻿﻿﻿﻿﻿﻿﻿﻿Living simply and mindfully is my new way of life. After four years of paring down my possessions, everything I own fits into my cozy apartment and a 10 x 10 storage unit.

But I still have boxes of stuff I don't need. Yesterday I took a load to Goodwill and spent a couple of hours sorting through boxes of papers and shredding a mountain of old documents. With each paper shredded, each object removed from my life, I breathe a little easier. Never again will I let "stuff and junk" prevent me from living joyfully and simply.

Even after so many moves and drastic changes, I am blessed beyond measure. For the past eight months I've been living in a lovely 600-square-foot mother-in-law suite in the home of friends Michael and Kathleen. Right out my front door I enjoy views of the garden and woods, bunnies and deer. I'm serenaded to sleep by coyotes.

Not only that, my new place has heat, a little kitchenette and a bathroom. I'm using my mini-fridge in my little kitchen. And the Luggable Loo is in my storage unit--just in case. Who knows what challenges are around the next bend? If the Zombie Apocalypse occurs and I need to live in a rustic setting again, I'm ready--and so is Loo! 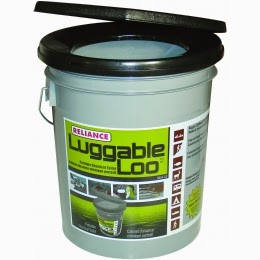 Tips for paring down to the essentials:


* Keep a "donate" box near the front door. When it's full, take it to your favorite charity.

* Don't keep papers forever. Keep the current month or two. Shred the rest--unless you need them for an itemized tax deduction. Talk to your tax professional before you start a shredding spree.

* Keep your paper shredder in an accessible spot. When you sort your mail, toss papers that must be shredded into the shredder basket. Spend two minutes a day shredding and you'll never have to spend an hour shredding.

* Some people shop as a hobby. If you're serious about reducing clutter, find a new hobby. In my old life, I loved finding treasures at estate sales. In my new, streamlined life, I don't shop for anything unless I actually need something specific.

* Don't bring something home without getting rid of something old. If you buy a new shirt, donate an old shirt you no longer wear.

* It's OK to keep things for sentimental value, but make a distinction between your child's plaster-cast handprint or baby book and a broken souvenir from your childhood. 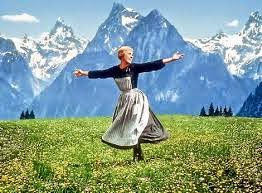 Today I'm counting my blessings. I've been reminded that Good Samaritans still exist. Sometimes I forget how many decent people are out there.

I'm a reporter for a daily newspaper in a busy metro area. My desk is so close to the police scanner that all day long I hear the horrible things that people do to each other. I've been hardened by the constant barrage of reports of criminal activity and the police sending the K-9 unit to bite the bad guys.

A little more than two years ago, before I became a newspaper reporter, I'd been described more than once as having the optimism of Pollyanna. The can-do attitude of Maria from the Sound of Music. Being as unworldly as Laura Ingalls Wilder, author of "Little House on the Prairie." As innocent as Mother Teresa. Some seasoned journalists might argue that I haven't changed much.

But sitting next to the police scanner and being exposed to the widespread ickiness of the world, I have changed. My edges are harder than they used to be. I'm more skeptical, less trusting.

This morning when I met my friend Patty for coffee, I couldn't find either my wallet or debit card in my purse. I'd gone hiking yesterday and had transferred my wallet into my backpack, so I was hopeful my wallet was still zipped securely in my backpack.

But when I returned home and checked my backpack for my wallet, it wasn't there. Then I conducted an archaeology dig in my purse by dumping its contents onto the couch. Aha! I found my wallet in the bottom of my messy purse. But my debit card wasn't there. I took everything out of my wallet to make sure I hadn't overlooked it. Still no debit card, but at least I'd found my wallet.

Last year when my debit card had gone missing, I'd stopped at the credit union to report it. As I climbed back into my car, there was my debit card, on the floor under the seat.

So I checked my car carefully, pulling the seats forward and back, looking underneath the seats, but I still didn't find my card. I wasn't ready to call "uncle" and report my debit card missing yet.

Retracing my debit card's steps, I checked online to see the last time I'd used it. My last transaction was Friday morning when I bought gas. Now it was Sunday afternoon, and there were no new charges on my card. That was a good sign. It appeared no one had stolen my debit card, but where was it? Had I seen it after I paid for my gas? No. I hadn't. It must have dropped out of my pocket while I was pumping gas. But with so many dishonest people in the world, what were the chances I'd find it?

I drove to the Arco station where I always fill up, walked in and asked the clerk if anyone had turned in a debit card Friday morning. Knowing my chances of finding it were slim, I held my breath.

He asked me my name. I gulped and told him.

"Can I see some ID please?"

He handed me my debit card! A Good Samaritan had found it in the parking lot and turned it in.

I thanked him profusely, clutched my debit card and smiled.

I wanted to dance, right there in the convenience store, next to the Ho-Hos and energy drinks. That's exactly the kind of thing to expect of Maria von Trapp.


Posted by Susan, who is paddling her own canoe at 8:18 PM No comments: