Letting Go of Fear & Stepping Off the Platform 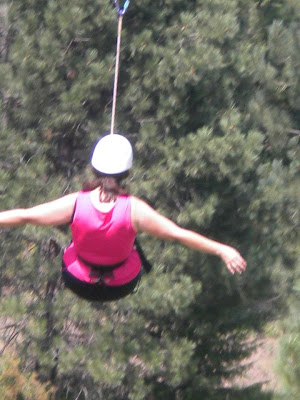 Last week at my family reunion I had the opportunity to ride a zip line for the first time in my life.

Relatives of all ages, sizes and fitness levels were zipping down the hill. I was eager to try this adventure.

With my zip line harness and hard hat in place, I  climbed up a tree, hand-over-hand up the spikes  until I reached the zip line platform. A man at the top attached my harness to the zip line, offered his hand as I stepped onto the platform and told me to step off whenever I was ready.

I looked down below. And then I froze.

What the heck was I doing? Why did I think I could muster the courage to step off the platform into nothing but air? Would the line hold me? What if something went wrong?

Then I took a few deep breaths, just like Jeanie, my dragon boat coach, has taught me to do before a race.

In the seconds it took to breathe deeply, I began to think clearly. I remembered I wasn't the same fearful woman I had been two years earlier.

Now I'm all about being brave and trying new experiences. I've tried kayaking, SUP (stand up paddleboard) and snowshoeing. Three times a week I paddle a dragon boat with the Mighty Women Paddling Club. I've exercised regularly, made better food choices and have lost 45 pounds so far. In the process, I've gained confidence. But I still face fearful situations.

Earlier that morning I'd been swimming in the lake with cousins and siblings when I'd found the courage to climb up the diving board ladder and forced myself to jump off the diving board--something I had never been able to do. I jumped multiple times to convince myself I'd finally conquered my diving board fear.

Yet here I was, standing on the zip line platform and paralyzed with fear. I looked down. This was a LOT higher than the diving board. But I had a secure harness to keep me from falling. It was safe.

Taking some more deep breaths, I told myself, "You can do this."

I stepped off the platform--and began zipping through the air. Exhilarating! True, I screamed like a girl all the way down the hill, but I kept my eyes open and enjoyed the ride.

What fears are holding you back from stepping off the platform and experiencing your next adventure? Let go of your fear. Take some deep breaths. And then step off the platform. That first step is a doozy, but what a ride awaits you!

For my next adventure I'm considering windsurfing lessons.

Posted by Susan, who is paddling her own canoe at 11:30 PM 2 comments: 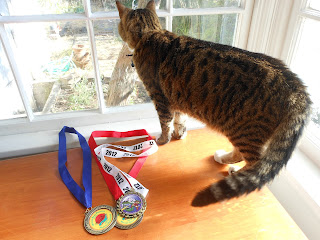 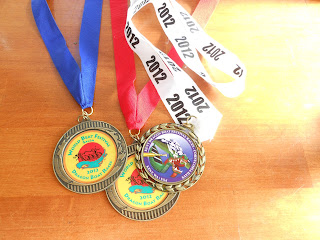 The London Olympics are in full swing, and the world is watching.

Images of athletes standing on the victors' podium and proudly wearing their gold, silver and bronze medals around their necks fill our computer and TV screens and our newspapers. The athletes kiss their medals. They are so overcome with emotion that tears well up in their eyes. Heady stuff!

Now that I am a seasoned dragonboat paddler who has paddled in 13 races in three dragonboat festivals this summer, I can relate better to the elation of performing in an athletic event and having my coach ceremoniously drape a medal around my neck. It's a feeling of accomplishment recognized.

This summer, I have collected three medals--gold, silver and bronze--for my team's performances in dragonboat races.

One of my editors at work asked me to bring my medals to our weekly team meeting. I did. I felt like a school kid during "show and tell." No one clapped or cheered. But my fellow journalists dutifully passed around my medals and said "cool" and other affirming adjectives.

I don't have a trophy case, so at home I have draped my medals from an antique floor lamp visible as I come through my front door and enter my living room. My friend Lee has been dragonboating for a few years and has collected an impressive array of medals. He is a woodworker and has made a large cutout of a dragon boat which he has secured on his wall. From this dragonboat hangs his collection of colorful medals. It's very cool.

Why are my dragonboating medals so meaningful? They are the only athletic medals I've won. Ever.

I'm not known for my athletic prowess. The only other time in my life I've been recognized for an athletic accomplishment was during my freshman year in high school when I received a track and field trophy for "most inspirational." I did not receive this trophy for my astounding performance. It's a pity trophy.

With my friends BaLinda and Linda, I had joined the track team for our rural high school. Anyone could join the team. The coach needed bodies to fill the events and qualify for track meets. No one was turned away. No one. Not even a 95-pound nonathletic farm girl.

I did like to run. Let me clarify the difference between enjoying running and being an accomplished runner. I never won a race. But I always showed up for practice and track meets, performed to the best of my nonathletic ability and cheered on my teammates. For this, I was awarded a trophy. Yes, it's a pity trophy, but it has a figurine of a girl running and is engraved with my name. More than 30 years later, I still display it on the bookshelf in my bedroom.

Most adults will not feel the elation of competing in an event and having a medal ceremoniously placed around their necks. I suggest that adults would be happier if medals were awarded for accomplishments we perform as parents, as employees and as citizens.

Why don't we have a gold medal awarded for the hours performed carpooling kids to their soccer games and standing on the sidelines for hours--year after year--in the relentless rain?

Wouldn't it be satisfying to receive a medal for all the nail-biting hours of teaching a teenager to drive? That's certainly a medal-worthy life event. The teenager is awarded with a driver's license and freedom, but all the parent receives are an increased insurance premium and sleepless hours late at night awaiting the safe return of the kid and the car.

What medal-worthy accomplishments have you performed? Give yourself a pat on the back. Then imagine yourself standing at the victors' podium, a medal draped around your neck. 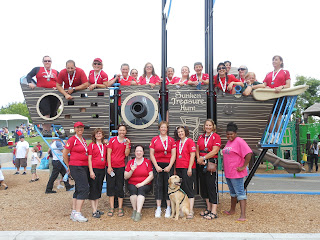 Let me tell you from my own experience. It feels amazing.

Photo: Here I am with my dragonboating team, the Mighty Women, proudly displaying our bronze medals at the Kent Cornucopia dragonboating festival.

Posted by Susan, who is paddling her own canoe at 7:32 AM No comments: