Snake on my pillow

There’s nothing like finding a snake on your pillow to put your trials and tribulations into perspective.

Recently I walked into the bedroom and I spied a snake curled up on my pillow. Thankfully, we do not have rattlesnakes here, so I knew it wasn’t a poisonous snake. It wasn’t a large snake, but it wasn’t a baby snake either. It was a non-poisonous, medium-sized snake. Still, it was a snake. And it seemed to be sleeping on my pillow. So I did what any brave Mountain Woman paddling her own canoe would do: I screamed. Then I quickly exited the bedroom and called the Mountain Man.

“I’ll be right there,” he promised over the phone.

I waited for him outside. When the Mountain Man searched the bedroom and our whole tiny home/camper, he could find no trace of the snake. No doubt my scream had awakened the snake and scared him off. However, the Mountain Man found a frog, which had climbed up the wall above the bed as high as he could. Perhaps the snake had been stalking the frog, and the frog was retreating from the snake. The Mountain Man released the frog outside and then drove away to go back to work. I was not too keen on going back inside, but I did because I had work to do.

Until that moment, my current tiny home/living wild challenges had been finding a single green frog on the floor on my side of the bed almost every day. I know it’s irrational, but I am freaked out by frogs in the bedroom. I am fine with seeing frogs in nature. Frogs belong in nature. They do not belong in a bedroom. But almost every day, I found another frog. Many days, I found him facing the mirrored closet doors. Perhaps he was a vain frog who was bewitched by his own reflection. We put the frog out. I use the word “we” loosely. I opened the door while The Mountain Man put the frog out. And then the next day, the frog would return to face the mirror. Sometimes before we could catch the frog, he hopped underneath the built-in bedframe and disappeared. Were frogs and snakes living underneath our bed?

The same day that I found the snake on the bed, the Mountain Man searched the bedding to ensure the snake hadn’t taken refuge there. He hadn’t. Then we took the bed frame apart to peer under the bed. No snake. But there was another frog. The Mountain Man put him outside.

The night of the snake I was a little nervous about climbing into bed. Was the snake still slithering around our bedroom looking for frogs? What if he crawled up onto the bed and tried to share my pillow with me? I removed the snake-contaminated pillowcase, threw it into the hamper, and slid a clean pillowcase over my memory foam pillow. I was not about to get rid of my comfortable, expensive pillow. I am too thrifty to toss out a pillow just because a snake slept there. Besides, buying a new pillow meant a very long drive into town. Somehow, I fell asleep and miraculously, I did not dream of snakes.

It has been more than a month, and we have not seen the snake again. We also are not sure how the critters are entering the bedroom, but the Mountain Man has crawled around the underbelly of the camper to plug holes a critter might crawl through.

Since the snake incident, we began hearing mice in the bedroom running in the ceiling right over our heads. If the snake experience hadn’t preceded the mouse invasion, I would have freaked out. Instead, I bought eight easy-to-set mousetraps. So far, we have caught nine mice. I have learned how to identify whether scat was deposited by a mouse or a frog. (Here’s an interesting fact: Frog poop is much larger than mouse poop.) The Mountain Man sets and empties the traps. I vacuum up the mouse poop and the frog poop. We keep the kitchen clean and store our food in the pantry in mouse-proof containers.

Is the snake still slithering around our home looking for frogs? It’s more likely that he made his way back outside. Just last night we found a frog on the bedroom floor. It had deposited a big frog-poo on the floor right next to the closet mirror. I picked up the poo with some toilet paper and flushed it. No big deal.

I have learned that life goes smoother if you follow the adage “Don’t sweat the small stuff.” With the perspective of experience, almost everything becomes small stuff. A few months ago, tiny spiders dropped from the ceiling every time I showered. Thankfully, I am not afraid of spiders and they weren’t black widows or brown recluse spiders. We don’t have tarantulas here either. I learned to calmly squish the tiny spiders with one hand while shampooing my hair with the other. We also survived living in a camper during the coldest, hardest winter in two decades. It was so cold inside our home that our clothing froze to the closet wall.

But hey—that’s life when you’re living wild. The extreme cold and the invasion of mice, frogs, wasps, flies, spiders, stink bugs and even a snake is just part of our wild, adventurous life in Northeastern Oregon. Overcoming hard stuff makes me stronger.

The hard stuff is tempered by the really good stuff. Last Saturday, as we paddled kayaks along the reservoir below our house, we watched two ospreys soaring above the river while looking for dinner. The next day, we hiked into an alpine lake, and the Mountain Man taught me the basics of fly-fishing. As I stood barefoot on the spongey bank and practiced casting my line, I reveled in the trout swimming near my fly, the glorious show of wildflowers, and snow still clinging to the high peaks above the lake.

Some days you might find a snake curled on your pillow. But other days, you get to hike into an alpine lake with your best friend. I even caught my first fish. 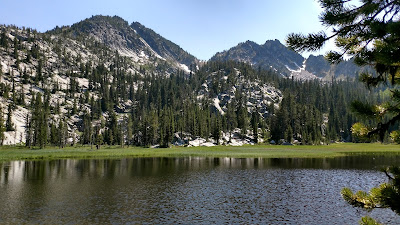 Posted by Susan, who is paddling her own canoe at 12:54 PM 2 comments: